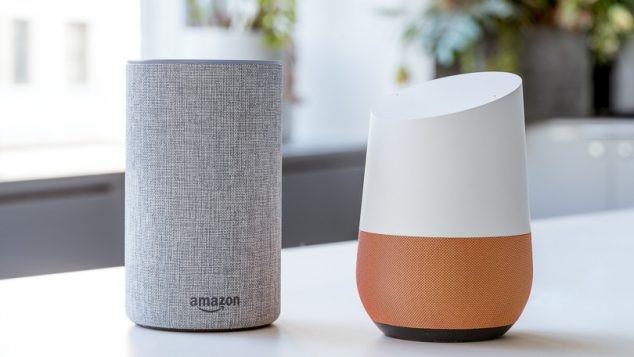 The best part of having a smart home is being able to control it as simply as possible. Whether it be from a tablet, smart device, or voice assistant, you want to be able to manipulate your home with ease.

Here at Hive, a premiere home automation company in Tampa, we are often asked which voice assistant (or otherwise called a smart ppeaker) does the best job controlling home technology. How accurate do commands have to be? What will the assistant connect to? Are there companies besides Amazon and Google?

In this article, we’ve highlighted the pros & cons of each major platform to help you decide which one works best for your smart home.

From smart speakers to televisions, to fridges, it’s not hard to find something controlled via voice commands. Since Amazon’s Echo cylindrical smart speaker burst onto the scene in 2014, the world’s been awash in voice-activated gear.

Three major players in the voice assistant market are Amazon’s Alexa, Google Home, and Apple’s Siri. While Siri is primarily associated with iPhones, she is also found in Apple’s Homepod, a smart speaker with many capabilities.

At their core, these devices are specifically designed to function like literal assistants. Like your phone, these speakers can play music, know the weather, and set alarms, among many other things. Some speakers feature brand-specific abilities. For instance, Alexa is capable of ordering items through your Amazon Prime account.

Yet, these abilities don’t end with the speaker. Alexa, Google Home, and Siri can connect to a variety of devices, creating a smart home system. By connecting devices via the assistant’s app, automating your home can become seamless.

Using these amazing features, you can control lights, audio systems, thermostats, and more with only a voice command. Or you can also pre-set scenes by creating specific commands within the apps. For example, by creating the command “Hey Siri, it’s movie time” your smart speaker will pull the shades down, turn on your favorite streaming service, and dim the lights. All by the sound of your voice!

Alexa and Google Home are on equal footing, with the two being speakers at their core. Both work with major streaming services like Spotify, Pandora, and Apple Music. Amazon Music, of course, is only available through Alexa.

Both speakers are also adaptable with Sonos. Sonos, a high-quality speaker, can is controllable by both assistants via the Sonos skill on the respective app stores.

Alexa and Google Home are both compatible with most major lighting control systems like Lutron, Philips Hue, and others. Like Sonos, these features are controlled via their respective skills on the app stores.

This is where Alexa and Google Home begin to differ. Being an Amazon product, Alexa connects to Amazon’s Fire TV. Using voice commands, you can control the television’s volume, channel, and more.

But you don’t need to have only Amazon products to get this feature. Logitech Harmony, a universal remote-like hub, connects to smart devices with ease, allowing you to control your smart TV with Alexa.

Google Home also has Harmony connectivity, but little else. While some Sony televisions include Google voice commands, it lacks the functionality of Amazon’s Alexa/Fire TV hybrid. For instance, Google can change input or switch streaming services with ease. But, it cannot change cable channels like Alexa.

For non-smart TVs, google’s Chromecast device (which connects your phone/tablet to the TV) can be controlled via Google Home voice commands.

Since Amazon has been around longer, they’ve had more time to refine its offering and support more natural language commands. But Google isn’t going anywhere. Its ability to answer more complex questions is undeniable.

In a 2020 test conducted by Loup Funds, a research-driven technology venture, both smart speakers were asked 800 questions. Scored on their ability to understand and answer, the study found that Google Home could correctly answer 93% of the questions. In comparison, Alexa accurately answered 80%.

Which Smart Speaker Should I Use?

Both virtual assistants have significant strengths. Below, we’ve included an easy-to-understand comparison table. These tables let you review which aspects are most important to you.

Technology changes constantly, so we’ll be sure to update this article as we see new meaningful industry developments. Have more questions? Reach out to us at 813-928-1585 to talk to a knowledgeable Hive representative today! Check out more amazing smart home technology on our Youtube Channel. You can also read more smart tech comparisons on our blog.